I was asked to provide Teambuilding Attitude Conflict Transformation [TACT] training to the staff of the Philadelphia Prison System. I requested as much diversity as possible, so staff from all five prisons, at all levels from CO to Wardens and from all departments were assigned to each training. After providing weekly trainings for two years, I was asked to provide follow-up trainings on anger and later on effective supervisor skills. After having trained over 70% of the staff, the training was incorporated by the training academy into the orientation of all new staff. It was placed in the second week of orientation, because the training academy felt it improved the entire training experience and better prepared the recruits for service.

Staff were mandated to take the training, so many, if not most, had negative attitudes in the beginning, yet 97% evaluated it as excellent (70%) or very good (27%) at the end. There were numerous testimonials from reducing documented use of force by 96% in the intake unit to departments proactively working together for the first time (medical and security) to a problem anger prone employee becoming the “Employee of the Year.”

Deputy Commissioner Press Grooms commented that there was a positive culture change in the system, departments were working together better, there was a “softening of gaps” between disciplines and ranks and there was an improvement in communication skills. Also, over the period of TACT trainings, there was an overall reduction in use of force, however this could not be accounted for just by the TACT training as pepper spray had been introduced during this period. A feature article was published in Corrections Today [American Correctional Association] about the experience of the Philadelphia Prison System’s with TACT training.

Each workshop participant was asked to fill out a workshop evaluation questionnaire and a work environment questionnaire. The results of the evaluation questionnaires show that nearly all participants rated the quality of the material and the quality of the presentation as excellent or good and most expected to use what they have learned in dealing with others. The results of the work environment questionnaire show that there is room for improvement in a number of areas. Although a statistically significant improvement was found in several areas during the first year, this trend did not continue during the second year. During the first year, a follow-up questionnaire was sent to workshop participants. These results were also positive, showing that the participants have been using the skills learned in the training in the workplace and at home. 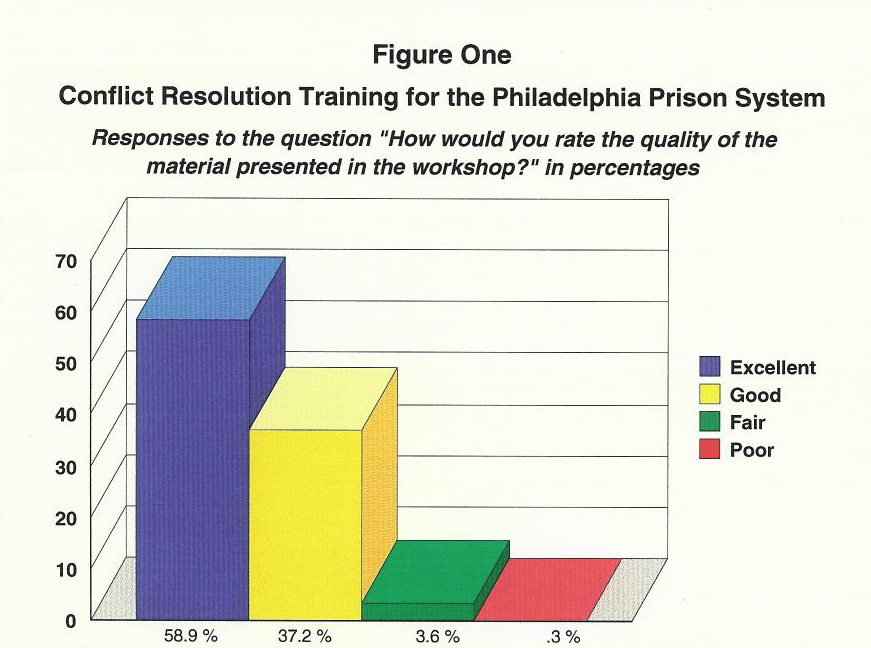 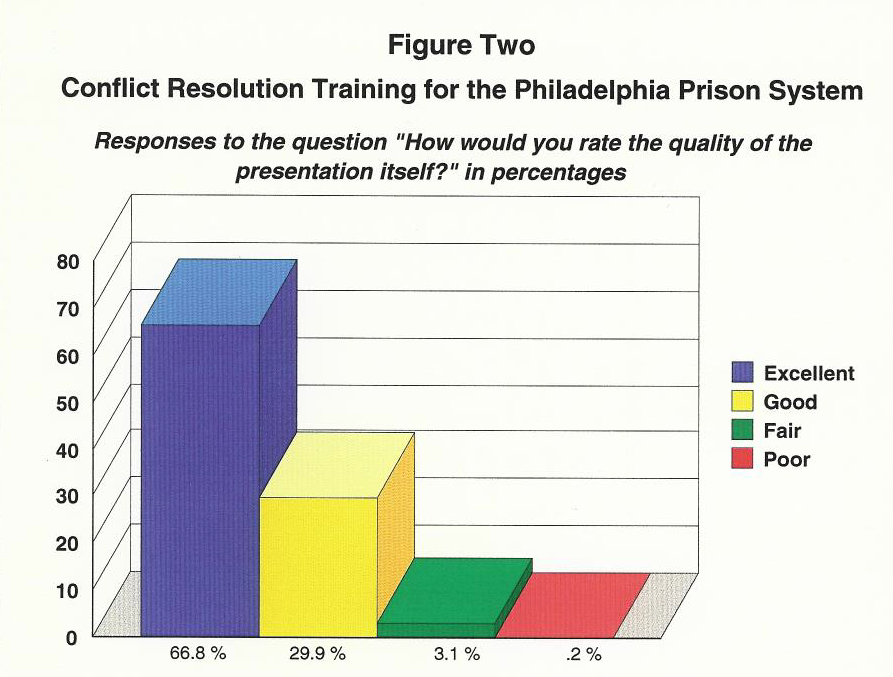 The next set of questions asks respondents whether they expect what they learned in the workshops to help them in both their work and personal lives. The results, which are presented in Figures Three through Six on the following two pages, clearly show that participants do expect the knowledge and skills gained in the workshops to be helpful at work and at home. Respondents indicated that they most strongly agreed that they expected to use what they have learned with family and friends. In summary, the respondents clearly valued the workshops and expected them to be useful in the future. 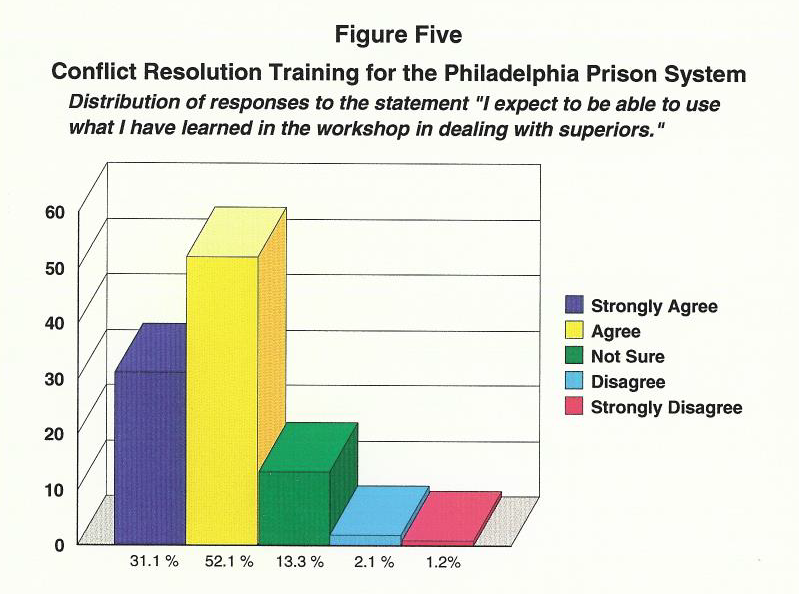 Participants were asked to write-in what they specifically liked about the workshop. More than one response could be given. The most common responses center on the theme of teamwork and group feeling. “I liked the group interaction because it showed that no matter how diverse the group was we were still able to arrive at a common goal.” The games and exercises were frequently cited as helpful and enjoyable. “I liked the light and lively or interactive activities as they really serve to build cohesiveness in a short period of time.” A significant number of respondents commended the instructors. “I never had an instructor as helpful, honest, or that participated with the group as much which made it a lot easier to learn.”

One respondent wrote, “I liked the fact that strangers and people of different jobs and ranks could work together and show teamwork and accomplish different tasks.” Wrote another, “If we envision change, a positive change for a brighter tomorrow, we must communicate, listen, and try to reach a solution through teamwork, especially through the six points [for problem- solving].” Another wrote that the most liked aspects were, “The trust that was built up in the group, the hope that maybe this will better the environment in the PPS.”

Another respondent wrote, “I feel more valued by the system as an individual by being given the opportunity to participate for three entire days in a workshop that focused on the essential elements of working together as people. My personal as well as professional life has been enhanced. I enjoyed the fun interaction we had and feel this was a very effective way to learn the concepts of conflict resolution.”

Participants were also asked to suggest changes for improving the workshop. Overall, the responses showed that participants valued the training. Many respondents commented that no changes were needed or suggested extending the training sessions, or adding follow-up sessions. One respondent wrote, “1 wouldn’t change a thing.” Another wrote, “Make it an ongoing program and bring the length of it to five days.”

There were a variety of suggestions for improvement. A significant number of people requested that administrators also attend or that all ranks be combined within a workshop. Some suggested a change in the timing of breaks. Others requested more corrections-related material. Most of the suggestions, however, were highly individual.

A participant wrote, “The workshop was excellent. The information was well presented; the instructor was warm and knowledgeable of the subject matter. I would love this workshop to somehow be incorporated in the training process of the new recruits at the academy. The workshop really impressed and inspired me and now gives me a whole new way to solve problems.”

Another wrote, “It was very useful, very helpful as a method of stress management. Often the #1 complaint on the job is stress and it is my opinion that much of the stress is actually caused by conflict. By learning better ways to handle disagreements, stress will be reduced.”

247 follow-up questionnaires were received. The results are favorable, showing that respondents have been able to use the knowledge and skills gained from the workshop at work and at home. 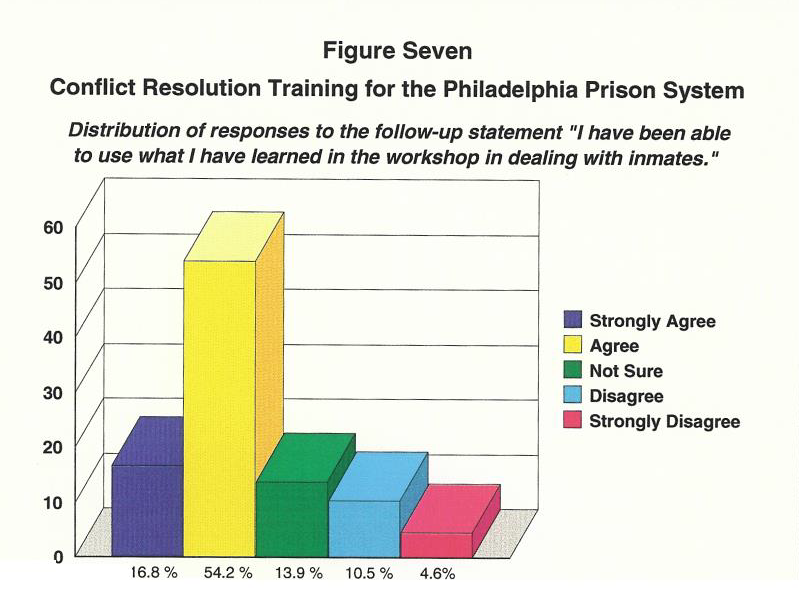 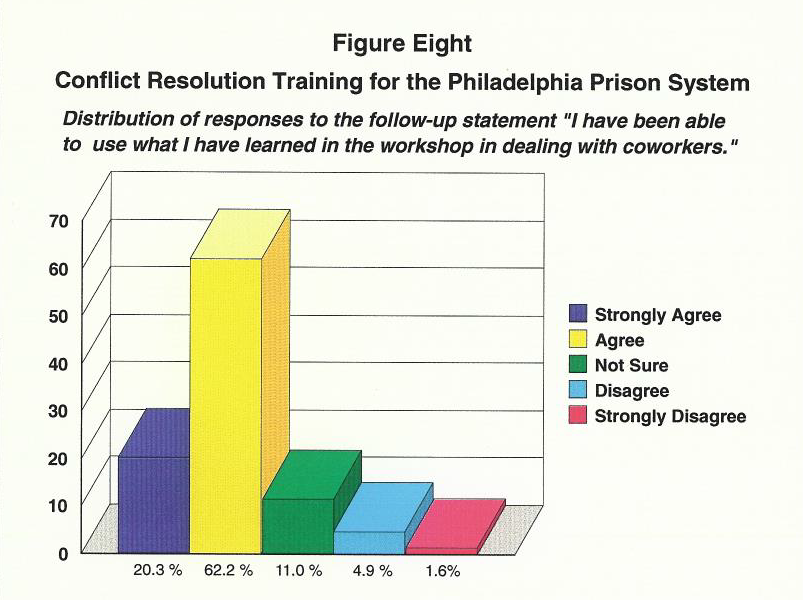 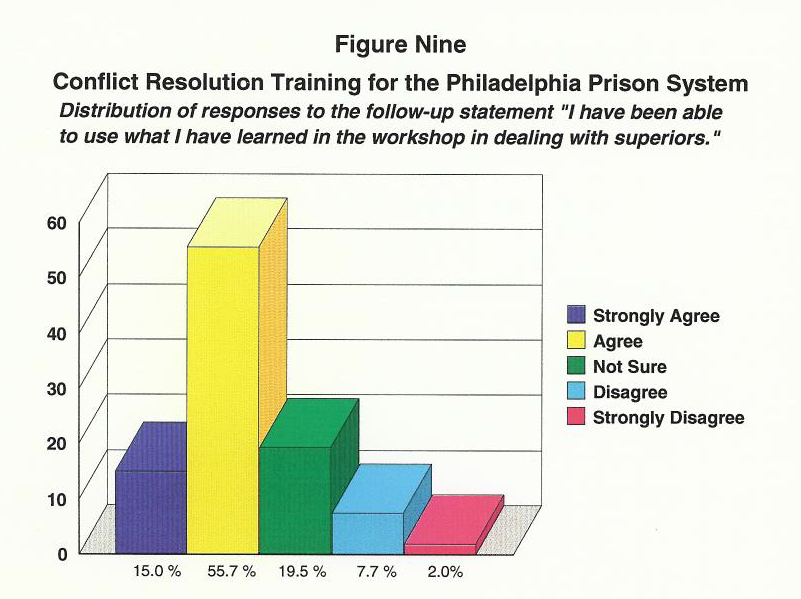 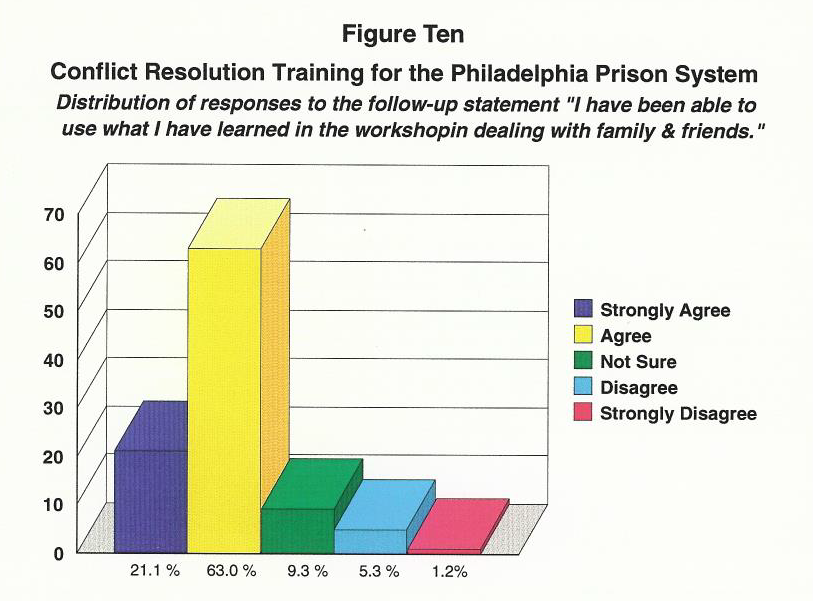